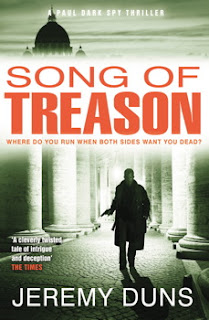 Not that long into this second instalment of the Paul Dark saga, I found myself reading an obscure article from the online archive of the Catholic newspaper The Tablet.  I had been moved to check something in Duns's text, because it sounded rather unlikely. Had there really been a small explosion in St Peter's, Rome in July 1962?  I clearly should have known better, having read the first novel in the series, and noted the meticulous way in which Duns contextualized his hero's adventures through  authentic historical detail, the sources for which are detailed in the extensive notes at the end of the book. The explosion, along with a mass of other real-life events, is listed in that appendix.

This instalment in Dark's history is set immediately after the end of the previous novel, in May 1969, and like its predecessor, begins with a tremendous and unexpected shock, which propels Dark into a perilous mission to Italy during which he will be once again caught between the competing demands of his cold war masters. Duns skilfully organises the narrative, using Dark's first-person account to lend immediacy to the action-packed plot. Dark, the servant of two masters, has to play one side off against another in an increasingly desperate race against time to prevent an assassination attempt. In the murky world of cold war espionage, no-one is to be trusted, and every action Dark takes is a risky one. In the end, he is forced to risk everything to stop a conspiracy that has its roots in the realignment of European power after the Second World war. As in the first volume, the narrative links together threads from Dark's past - here, his experience in Istanbul in the early fifties, as well as the crucial period in the last days of the war - to produce a complex and believable backdrop to the action.

And the action is relentless. Duns habitually uses precise dates as chapter headings - Thursday 1 May, 1969 - so the reader is aware that the plot is unfolding swiftly, and the main events of the 1969 narrative take place over just three days. The story moves at a blistering pace, hinging on Dark's increasingly frantic attempts to understand the situation he is in, and to save his skin - and that of Sarah Severn, the diplomat's wife who has become caught up in the crossfire of double-dealing and treachery that constitutes normality in Dark's world.

I enjoyed this tremendously. It is a worthy successor to Free Agent, and whets the appetite for the third story, a taster for which is added in the paperback edition. Duns has created a character who can stand alongside Smiley and Harry Palmer in the annals of cold war fiction.
Posted by Rob at 1:23 pm