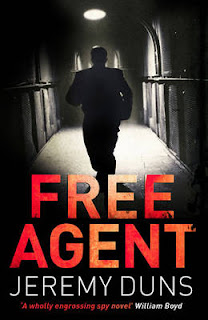 Spy novels have a long pedigree in English. Joseph Conrad's The Secret Agent (1907) can probably be counted the first in the genre. Erskine Childers's The Riddle of the Sands, published four years earlier, is really a thriller, establishing the John Buchan style: plucky Brit gentleman adventurer foils dastardly plot by fiendish foreigners, a template taken up enthusiastically by everyone from Agatha Christie in her first Tommy and Tuppence adventure The Secret Adversary (1922) to the Bulldog Drummond series by Sapper (1920-1937). The spy novel proper comes of age with Eric Ambler's atmospheric The Mask of Dimitrios (1939), made into a memorable film in 1944. In this novel and others, such as Journey into Fear (1940)  and The Light of Day (1962), Ambler perfected a grittily realistic style, in which the hero is often amateurishly  inadequate, but manages to achieve some sort of victory at the end. The moral universe of these novels is far removed from the complacent certainties of Buchan and Christie: here, the characters' motivations are ambivalent, and their loyalties never certain. Peter Lewis, Ambler's biographer, wrote that "Ambler raised the thriller from the subliterary depths, showing that the genre and good prose were not incompatible, and redeeming its conventions for more serious purposes than the display of macho derring-do. Virtually single-handedly, he redefined the thriller so as to make possible the achievement of such postwar realists as John le Carré and Len Deighton." That comparison is significant, showing how Ambler paved the way for the establishment of the classic cold-war spy fiction of the sixties and seventies. Ambler was admired by Graham Greene, who said he was ''the greatest living writer of the novel of suspense'' - not a bad item for the CV.

Jeremy Duns, I know, is a great fan of Ambler, and has clearly read his Le Carré and Deighton too. His series of novels featuring the spy Paul Dark is set in the late sixties, when the Cold War was at its height, and the British secret service was still recovering from the antics of Kim Philby and his colleagues. So Free Agent is clearly indebted in some ways to its sixties predecessors, but in my view Duns has hit upon an original and winning formula. Dark's surname is a clue to his hidden depths, and he can certainly surprise the reader. The novel is written, unusually for this genre, in the first person, so we experience everything through his eyes. After an intriguing opening chapter which might at first appear to be quite derivative - rogue spy is summoned to see the chief - we are hit by an enormous shock which propels the narrative forward, and the novel gathers pace from there, involving a series of twists which all ultimately derive from the young Dark's adventures in the chaotic aftermath of World War II, aspects of which we see in flashback. The tension is maintained throughout, as we accompany Dark on an improbable, but just-about-possible adventure involving devious and grubby diplomacy in Nigeria, during its civil war. Duns is very adept at using historical detail, so we encounter some real-life figures as well as his creations. I was interested to see several pages of notes at the end of the book, detailing the sources used by the author, and explaining some of his decisions. That insistence on locating the narrative in a well-documented historical context lends credibility to a story that might otherwise be fanciful. It never strays into James Bond territory, but there are a few passages which might raise an eyebrow. It's the attention to detail that keeps it grounded - for instance, Duns notes that Lagos is normally one hour ahead of London, but he has it at the same time, because Britain experimented with British Standard Time (GMT +1) during the relevant period. Would any reader have noticed this? I doubt it, but it shows how keen Duns is to get his period detail correct.

It's difficult to say more about the plot without revealing too much, so you will just have to take my word that this is a terrific, action-packed read, that manages also to present agonising moral dilemmas alongside the mayhem. Dark is a damaged figure, like the protagonists of Ambler and le Carré, and this is crucial in lifting the novel out of the "rattling good yarn" category into something more thought-provoking and complex. He is an intriguing and fully-realised character.  I am looking forward to reading the next two books in the series, which are set in the months after the conclusion of this one, and then will be on the lookout for the fourth book, set some years later, due out in the new year. Highly recommended, even if you are not a fan of spy fiction. This is intelligent, literate story-telling, featuring a truly gripping narrative that never fails to surprise.