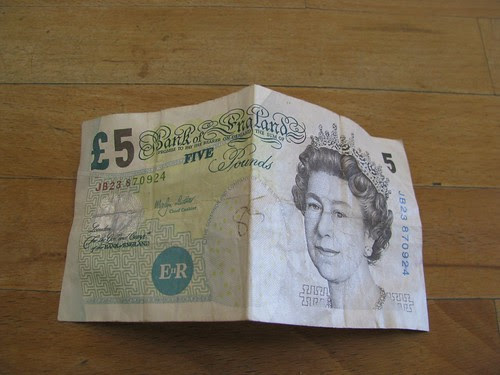 I bought some supplies in a nationally known store the other day. I won't identify the store, but the words "Marks" and "Spencer" appear prominently in their name. The cashier waved the goods across the barcode reader, and then asked me for £24.13. Unusually for me, I had actual cash money on my person, so I proffered a £20 and a £10 note. The cashier opened the till, and gave me 87p. I said "Erm, I think I gave you £30." She shot back, rather too quickly "No, you gave me a twenty and a five."
"Oh," I said, beginning to doubt it myself now, "I thought I gave you a tenner as well as the twenty." At this point, she rang furiously for the supervisor, who waddled over at leisurely pace. I said that I might well have been mistaken, and she said again that it was definitely a fiver, because she had to put it in a special drawer. A very brief conversation with the supervisor then ensued. The supervisor tapped in something on the till, the till opened, and the cashier handed me £5 and my receipt. The supervisor, who hadn't even acknowledged my presence, waddled off. I said to the cashier that if there wasn't a £10 note in the wrong place, I would accept that I'd been wrong. No, that wasn't possible: I had to accept the extra £5. No-one said it, but the underlying implication was that I'd tried it on, and they would just write off the loss.
So now, I feel guilty at having extracted £5 from this enormous company. What struck me was that, in the olden days, the cashier would probably have put the notes in a clip on top of the till while she rang the purchase up, so it would be very clear what had been tendered; and she would also have probably said "Twenty five pounds" when I gave her the money- two checks to ensure that the transaction was transparent.
I'm still not sure whether she was right or I was. The upshot is that, if I use that store again, I will always pay by card. And my favourite charity is £5 richer.

Photo: TheTruthAbout
Posted by Rob at 9:03 am

I've had this a couple of times in the past and it's clear they think you're trying to pull a fast one.

In some shops the cashier takes the cash and comments on which notes you've handed them (e.g. "That's two tens"). Seems like a good idea, so I now adopt a similar tactic as I hand notes over to any cashier. Can't be too careful, eh?

At the other end of the scale, a few times over the last year or so a famous fast food chain that sells fried chicken has short changed me by rounding down to the nearest ten pence. On one occasion they told me "sorry, we've got no two pences" - when I asked if they could give me two 1p coins (which they could!) they looked at me with utter disgust. It's happened so often that I'm sure it must be an organisational policy.

Hi Martin - yes, good idea. I will adopt this tactic.
Mike - as a vegetarian, I've no sympathy:-)
But really, that's outrageous. If they do that with every customer, they'll build up quite a nice little pile. Ask to speak to the colonel!

I don't know why they didn't just do a till check, or at least take your details and get back to you once the till had been counted at the end of the day - that's what usually happens. You must have an honest face ;-)
Nice of you to give away your hard-earned cash though. Good idea of Martin's too - done by many a canny shopper these days..

There's a long history of companies rounding down change. Peter's Aunt was in M&S back in the days of half pennies. It was "company policy" not to give 1/2p in change. Outraged by this she refused to leave the checkout until they gave her her full change. The longer they took to sort it out (supervisors, managers etc were all called over to discuss the 'problem') the louder she shouted about all the extra cash they were accumulating. So I wouldn't worry about their (possible) 'loss' - I'm sure they've made it up in other ways.
There's also a history of problems with the £5 note. See this article from 1932: http://www.sfw.org/books/fivepound.html

Speaking of contentious currency transactions, here in Washington DC taxi drivers and notorious for not having change for a $20 bill. Or whatever other bill you hand them. They are hoping you will round way up as a tip. Recently I had one who was very cross with me for handing over a 20 for a $6 fare. In response to his assertion that he didn't have enough change, I told him his other choice was accepting a five dollar bill. This of course made him dig around in every pocket until he came up with the appropriate change for the 20.

On the way out of the cab I politely suggested to him that he was running a business and that if he was short of change, the onus is on him to make it right. And without all of the attitude.

Hi Thomas - yes, Washington is not alone in having taxi-drivers with no change. The whole tipping thing in America is just a nightmare to Europeans - here in the UK, in restaurants and with taxis, people generally tip a little - maybe 10%- but you don't have to, and nobody will pursue you down the street if you don't. In Denmark, it's definitely not expected, and in Iceland it just doesn't happen. In Germany, you tend to say "up to" whatever- so if a bill is 18 Euros, you might say "up to 20" and that's that - but again, there isn't a sense that it's compulsory to tip. Travellers here often want to tip in pubs, where a tip is very rare, and not expected.