I read, as I suppose many of my generation did, Eric Ambler's  The Mask of Dimitrios and Epitaph for a Spy when I was a teenager. They were exciting tales of action in a Europe on the brink of war, with heroes not of the John Buchan mould (I'd read the Richard Hannay books of course) but ordinary men plunged against their will into extraordinary experiences. Journey into Fear, memorably filmed with Joseph Cotten and Orson Welles, is another prime example. Since my teens, though, I hadn't read an Ambler novel, but my revived interest in spy fiction, sparked by the huge enjoyment I derived from reading Jeremy Duns's  Paul Dark sequence, sent me back to Ambler. 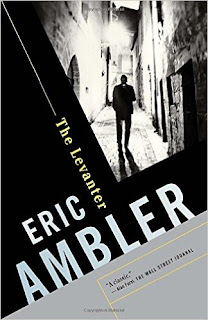 The Levanter is late Ambler, first published in 1972. It is set a couple of years earlier, largely in Syria, and is concerned with the way in which one of those typical Ambler protagonists finds himself embroiled in a terrorist plot. Reading this novel in 2016 is instructive, if only to realise how depressingly little attitudes in the Middle East have changed in the intervening forty-odd years. The eponymous Levanter is Michael Howell, whose very British name conceals a more complex mixed Armenian, Cypriot and Lebanese heritage. He's the head of a family engineering company with a long history of business in the Mediterranean and the Middle East, and is doing well in the difficult circumstances of the time, negotiating with the one-party Syrian regime with the help of his Italian secretary/lover. But, as is so often the case with Ambler, his relatively cosy world is about to be shattered by the intrusion of some brutal political realities. A terrorist group, the Palestinian Action Force (modelled on one of the many such groups that emerged after the Six-Day War of 1967) has infiltrated the company in order to manufacture bombs to use against Israel. Howell, for reasons carefully explained, cannot simply go to the authorities, and the scene is then set for a tense game of cat-and-mouse as Howell attempts to outwit the coldly sadistic leader of the terrorist cell, Salah Ghaled.

The narrative is split between three first person narrators: Lewis Prescott, an American journalist, who provides the background detail through his account of an interview with Ghaled; Teresa Malandra, the secretary, who offers a wry perspective on her boss; and Howell himself, who carries the bulk of the narrative, mostly attempting to justify his actions since he has been, we glean, vilified by both sides after the events have concluded. Howell is always at pains to show how his actions stem from the best of motives, and his self-deprecating stance helps the reader to identify with him as he becomes increasingly entwined in the terrorist plot. Ambler stresses his ordinariness - he is a successful and enterprising businessman, yes, but as Howell ruefully points out, "when the commodity is violence and the man you are dealing with is an animal" his business skills are of little use. Howell's narrative is careful and detailed - that attention to detail is one of his character traits, but also leads to the only parts of the story which drag a little. I'm not sure the reader needs to know quite as much about the construction of dry cell batteries as we are given here. That said, the second part of the novel, which concerns the attempted raid by the terrorist group, moves at a fair pace, and the scenes on board Howell's ship the Amalia as the climax approaches are gripping.

Ambler maintains his usual high standard in this tale, where every character is flawed and no-one completely blameless. In a world stripped of moral certainties, Howell represents a kind of grubby virtue.
Posted by Rob at 5:26 pm No comments: 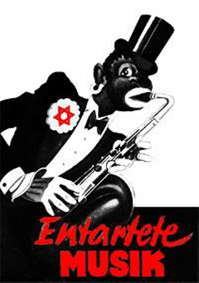 To the Manchester Jewish Museum, on Holocaust Memorial Day, for a concert of music condemned and banned by the Nazis as "degenerate." This was a bold move by the museum, which has decided to host more events to gain attention ahead of a big rebuilding programme.

After a glass of (kosher, of course) wine, we were invited in, to find the inner space dominated by the famous poster which was used as part of the Nazi campaign against music of any kind which did not suit the Nazi philosophy. The campaign, during which concerts were held in which the music was vilified, ran parallel to the "Entartete Kunst" exhibition, which condemned virtually all experimental art, particularly that produced by Jews.

The programme featured songs by Weill and Brecht, Krenek, Holländer and some atonal Schönberg. The show was devised, presented and sung by Peter Brathwaite, who gives a full account of the artistic process in this article. We were delighted both by Brathwaite's strong voice, and the engagingly innovative style of presentation. A series of evocative photographs accompanied each song, animated through some computer trickery, with a translation of the lyrics alongside. It gave each song an added dimension, and really enhanced the show. You can get some idea from these stills on the @MusicDegenerate Twitter feed: 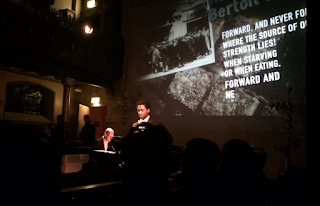 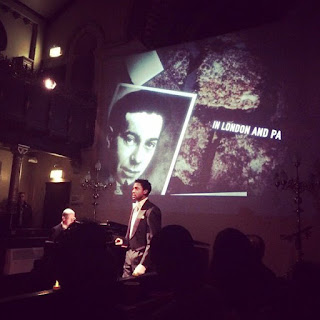 Brathwaite, of whom I predict great things, is an assured and accomplished performer. His German pronunciation is excellent, and he attacked each song with relish, really bringing out the savagery of the satire, and the black humour too. It was great to hear the Brecht / Eisler "Solidarität" from the wonderful film Kuhle Wampe as a song in its own right.  And, inevitably, we finished with Brecht and Weill's  "Mackie Messer", a song whose bizarre transition into a standard easy-listening tune about mass murder deserves a post of its own.

Peter Brathwaite, on this showing, is a star in the making. I would love to have a recording of his versions of these songs, and surely that will come. In the meantime, he tells me, we will be able to see some footage filmed on the night. I look forward to that immensely.
Posted by Rob at 5:36 pm 1 comment: 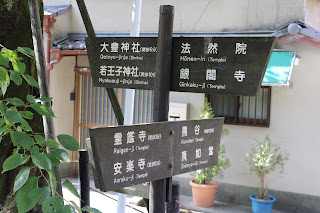 Onto the Philosopher's Walk in Kyoto. Note the position of the apostrophe: we are talking about one philosopher here, Nishida Kitaro, a professor at the university, who walked here daily in the nineteen twenties, and whose work, rather pleasingly, is described as "path-breaking." Nishida's best-known philosophical concept is "Absolute Nothingness" but it's difficult to imagine he came up with that idea on his daily constitutional, since the walk is full of life and interest.

The paved pathway runs either side of a small canal on the western side of the city at the base of the Higashiyama mountains. We approached along suburban streets that reminded me of the posher suburbs of Berlin or Hamburg. The walk is not a taxing one, and there is no particular advantage in starting at any one place, so we just joined it at the nearest convenient entrance and walked north. 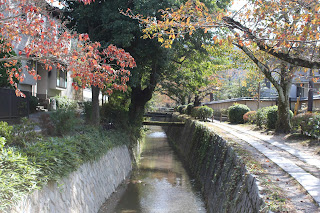 At every turn on this walk, the visitor encounters something of beauty, whether it's the autumnal colours which were so vivid when we were there, or the serenity of the shrines that line the pathway. One stop was at the Eikan-do temple, which has a pagoda whence panoramic views of Kyoto can be had. 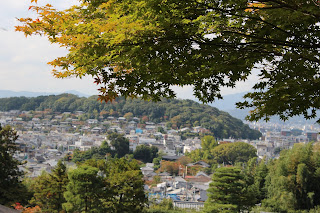 We strolled further, past several smaller shrines, to the Honen-in temple of the Jodo sect, which is very rustic in appearance, with a thatched roof, and some fine examples of the raked-sand Zen gardens that we encountered many times on our trip. 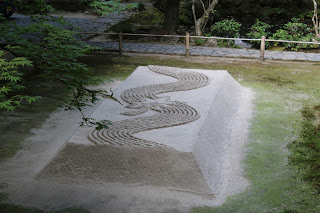 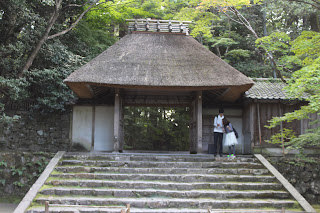 We walked further, encountering quite a few well-fed and happy-looking cats, who seem to be part of the Philosopher's Walk experience. They certainly must be among Japan's most photographed cats: everyone stopped for a quick snap. 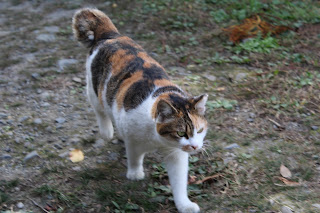 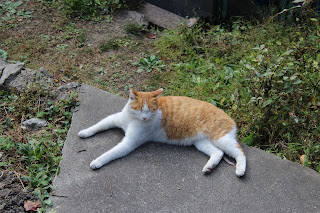 The main attraction on the walk is the fifteenth-century Ginkagu-ji, or the Silver Pavilion. Not that it's silver - that was the original plan, apparently, but the shogun Yoshimasa, who wanted a silver version of the Kinkaku-ji golden pavilion in Kyoto city, was frustrated by the intervening war, and the plan was never executed. This is the most popular spot on the walk, and we saw tour groups there, whose whole experience of the walk was a bus to the entrance of the pavilion, a quick look round, and then back on the bus. They missed a lot. It has beautiful gardens, including a massive raked sand area. We loved the colours. 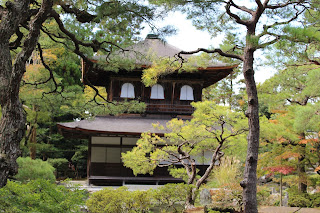 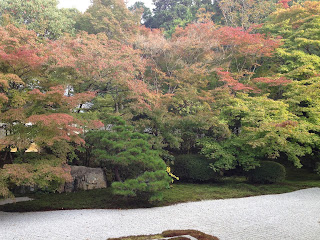 We walked down to the southern tip of the walk, where the large Nanzen-ji temple complex awaited us. This is a series of buildings, dating back to the sixteenth and seventeenth centuries, with much open space around it. We wandered around, enjoying the peace and the massive presence of history: 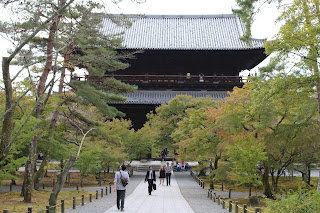 One curious feature of the area is the presence of a very western-looking aqueduct, built in the late nineteenth century to carry water via the canal to Kyoto. It seems incongruous amid all the formal temple architecture. 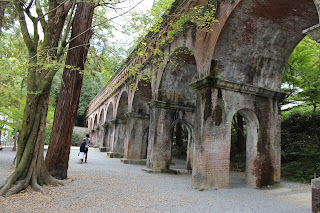 Our final stop on this walk was the lovely Tenjuan temple, a kind of haven dedicated to the Zen master who served Emperor Kameyama in his religious studies, and most notable now for its gardens. After a long day's stroll, we really enjoyed sitting in the garden, particularly around the lake, where the carp are quite demanding: 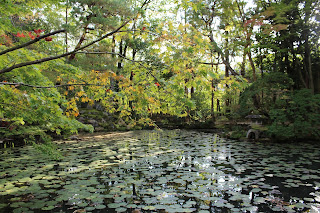 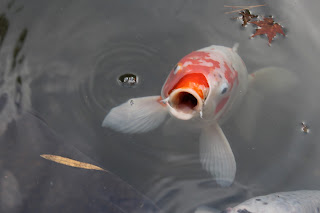 This was a perfect day. The walk was full of historical interest, and had plenty of places to find refreshment and unusual crafts, of a definitely superior kind - no tourist tat here.

We had another day in Kyoto, which will be covered in the next instalment. Stay tuned. 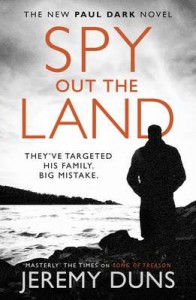 Shiny New Books 8 is now out. As usual, it features an eclectic range of book reviews both fiction and non-fiction, including my take on the fourth Paul Dark espionage novel. There's also my guide to the fiction of Manchester. But don't let that put you off - there's lots of stuff here to whet the appetite of the most jaded reader. I was intrigued by Eleanor Franzen's review of Jeanette Winterson's The Gap of Time, the first in a series in which contemporary novelists present their versions of Shakespeare plays. I look forward to Howard Jacobson's Merchant of Venice. In Bitter Chill looks like the start of a promising crime fiction career, and a new novel by Umberto Eco is always an event.

In non-fiction, Neurotribes, about Autism, seems to be a compelling read, and Barbara Howard makes a good case for yet another biography of Charlotte Brontë. In the reprints section, interesting to see that the small independent press Daunt has reissued John Collier's quirky 1930 novel His Monkey Wife.
So, lots to read and enjoy at SNB. Have a browse!
Posted by Rob at 12:52 pm No comments: