When not engaged in things Burgessian in Malaysia, we had the chance to wander around Kuala Lumpur. I think the term "City of Contrasts" might have been minted for it. The high tech, ultra-modern cityscape, symbolised by the Petronas Towers, lives cheek-by-jowl with the remnants of the colonial past, and reminders of the cultural diversity of the place. There are also lots of monkeys: 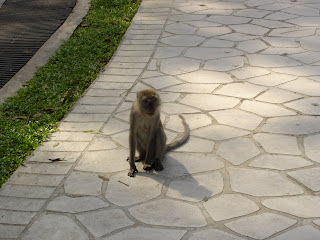 This was one of the few that stayed still long enough for me to photograph. This was on a Sunday stroll through the park, during which we regularly encountered dozens of these chaps.
Elsewhere in the city, it's not unusual to encounter, in a suburban street, an extraordinary temple like this: 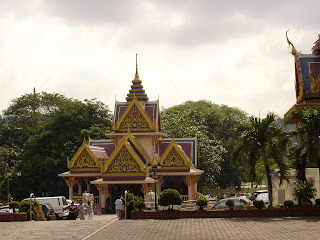 In the Chinese quarter, where apparently lots of traders don't really like photographs, because of the, ahem, provenance of the goods on offer, we came across temples to Mammon 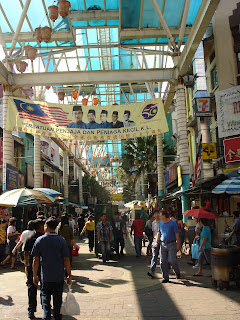 and to more dignified deities: 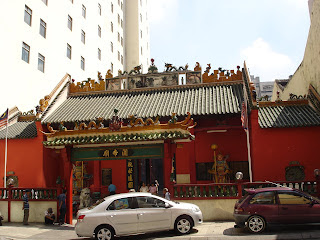 Another highlight was the night market at Bangsar, where the senses are assailed by a mass of competing aromas. Not sure I'd go for this guy's produce though: 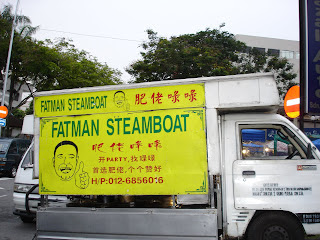 More Malaysian images to come.
Posted by Rob at 8:44 am

Lucky lucky you! What an exciting time you have had. Look forward to more photos.

I'm reading with delight and pleasure about your Malaysian experience. Sounds fantastic! And great photos, too!

Thanks to both for those kind comments. More to come when I get a chance.

Gorgeous pics - love the monkey. Reminds me of when I was in Vancouver and all that wildlife just wanders about - (raccoons are as exotic as monkeys aren't they?!)

Love the stuff going on in the background too, like what on earth is happening to the man in the stripey shirt in front of the temple?!

Only just spotted that Lisa- blimey, it's like "Blow-Up" isn't it? Plain clothes police arresting him for supporting Celtic?

It's very interesting to see how people from other place view the place you come from.

I'm a malaysian and stay in KL (that's what we usually call Kuala Lumpur) for the last 10 years.And i always thought that within this region, KL is comparatively very efficient but a rather boring place.

And i've never noticed that temple you mentioned before.The one with the Thai architecture.

Now you've got me Greenbottle. Somewhere around Petaling Jaya I think - or PJ as you and I know it...

the temple is Wat Chetawan on Jalan Gasing.

Thanks, Diana- always good to have local knowledge.

now i remember.i sometimes pass this way to go to SKOOB bookstore at jalan othman PJ.