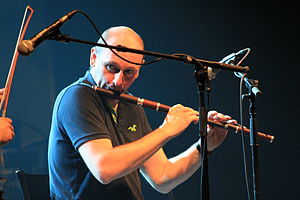 To the Manchester Jewish Museum again, for the latest in their series of innovative concerts. In the last couple of years, the museum has showcased the work of Manchester University lecturer Richard Fay, who runs a klezmer module in the music department. The students play as a group, or kapelye, and also with Richard's ensemble. We have been to a couple of these concerts, and most enjoyable they were: the students are very proficient, and they play with skill and zip. This year, a more ambitious programme was presented. The Jewish presence in Manchester is mirrored by the Irish: both originally poor communities of immigrants who arrived in the booming Cottonopolis of the nineteenth century seeking a better life. The areas of Manchester where they lived were close to each other, so Richard imagined how it might be if the sounds of one community floated across the Irk to intrigue the ears of the other. For this, he needed an Irish group, and, in what is definitely a bit of a coup, he recruited none other than Manchester Irish music legend Mike McGoldrick, last seen by me on the stage of the Royal Albert Hall in Mark Knopfler's band.
Richard's programme was called "Amid the Mirk over the Irk," and while the pedant in me would want that third word to be "Murk", it described the context very well. A little scene-setting spoken word introduction quoted contemporary accounts of the filthy slums crowded around the "pestilential effluvia" of the River Irk around Red Bank (where the Jews had gathered) and the ironically named Angel Meadow, where the Irish had set up home. Then we were treated to a series of tunes where one or the other side would take the lead, with their counterparts joining in, and collectively they produced some glorious music. It actually seems relatively unlikely that there was much crossover at the time, but it's a nice conceit, and allowed for some vibrant fusion.
McGoldrick brought along Dezi Donnelly, with whom he played all those years ago in Toss the Feathers, and the very accomplished banjo and guitar player Angela  Durcan. Mike called the shots when the two units played together, a nod of the head or a raised eyebrow being enough to convey his instructions. The former student group, L'chaim Kapelye, acquitted themselves brilliantly. We had seen some of them before in previous concerts, and once again were impressed by their virtuosity. They have a potential star in bass player Lucie Phillips, who again pleased the crowd with her renditions of  the jaunty "Der Rebbe Elimelech" and the old favourite "Yiddishe Momme," both of which she sang last time. I would love to hear her sing the Kurt Weill repertoire - she would give Ute Lemper a run for her money.
The gig was covered by local writer Mark Davoren, and his very detailed account is already available. I won't add more except to say I was intrigued by the final spoken word passage, entitled "Our Ancestors Forty Thousand Years Wide" which seemed very mysterious. I thought it might be an oblique reference to the idea that art is generally agreed to have become a human activity about forty thousand years ago. It turns out that it's the name of a traditional klezmer tune which features on this album by Frank London's Klezmer Brass All Stars. Frank London, I discover, is a member of the fabulous Klezmatics. The tune has no lyric, other than a "ya-da-da" which we all sang along to as the final piece in the concert. A quick encore led by Mike McGoldrick, and we were off into the rainy Manchester night. Another excellent night at this venue, which is really working hard to make itself a destination in this most multicultural of areas.
Posted by Rob at 12:59 pm